Wairarapa’s east coast is a dangerous place for ships. Over time the reefs, winds and dangerous currents have conspired to wreck a large number of vessels. There is no large harbour between Napier and Wellington, and ships caught in storms off the Wairarapa coast were often driven onto the shore.

The Castlepoint area had a number of wrecks, notably the White Swan, carrying a load of politicians from Auckland to Wellington in 1862, and the Sovereign, wrecked at Mataikona in 1894.

The government saw the need for a navigation light on the coast and chose Castlepoint reef as the site of the last of the “watched” lighthouses to be built in New Zealand.

The lighthouse was constructed in Wellington, by S Luke and Company in Victoria Street. In mid 1912 the local newspaper reported that the lighthouse had been cast in iron and was being erected in the yard. The bottom ring was 5.4 metres wide, the top one 3 meters. Each of the ten rings was two meters high. It was anticipated that the lighthouse would be finished within a month, then dismantled and taken by sea to Castlepoint where it would be re-erected.

In fact the lighthouse is composed of seven rings, each 3 metres high, and is the North Island’s tallest lighthouse. It stands some 52 metres above sea level.

The lenses were made by Barbier, Benard & Turenne, in Paris, the lens turning apparatus by James Milne and Son, of Edinburgh, and the lantern, which is the glass part and the dome, was made by James Dove and Co, also of Edinburgh. The lenses turned in a mercury bath. The incandescent apparatus – originally powered by kerosene - was provided by Chance brothers, of Birmingham.

The dismantled lighthouse was shipped to Castlepoint and landed at the old jetty. A track was built in preparation for its arrival and a team of horses pulled the house to its new site. The Ministry of Works oversaw the building of the lighthouse, with its internal platforms and spiral staircase.

It was officially lit for the first time on Sunday January 12, 1913, sending out a triple flash every 45 seconds that could be seen for 35 kilometres.

Castlepoint was a favoured station for the crews working for the Marine Department. Most other lighthouses are in very inaccessible sites with little direct contact with the wider community. At Castlepoint there was a small township, with a store, a hotel and a school.

Not all the keepers fared well though. In 1922 the principal keeper was killed after falling from the tower – his ghost is reportedly seen still, but it is said to be a benign presence.

The 1942 earthquakes caused no structural damage to the tower although experts were called in to assess how much it had shifted during the shocks. The lenses were dislodged from their mercury bath though, and the mercury ran free on the floor. A large china chamber pot was used to collect the mercury for reuse in the bath. The mercury rotation system was replaced late in the 1940s with a series of rollers.

In the 1950s the illumination source was converted from kerosene to diesel. A generator was installed at the end of Jetty Road, wiring taking an electric current to the tower. In the early 1960s the Wairarapa Electric Power Board provided reticulated power to the area for the first time and the lighthouse was switched to this power source.

In the early 1980s it was decided that all New Zealand’s lighthouses could be automated and the lighthouse keepers dispensed with. For a time Castlepoint lighthouse held out but in 1988 Grant Hitchcliff, the last keeper, signed off for the last time. The lighthouse is now controlled by a computer in Wellington. 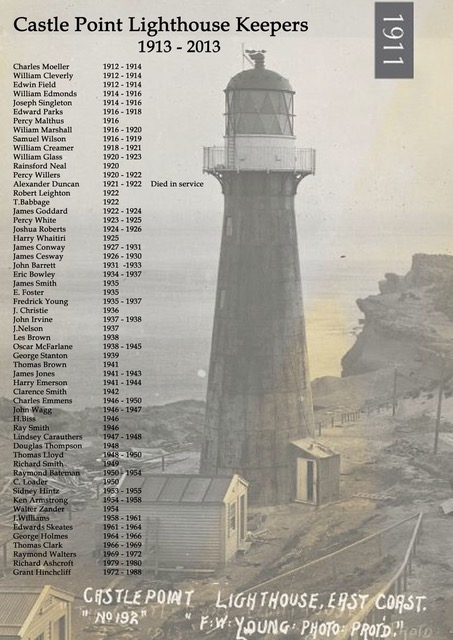 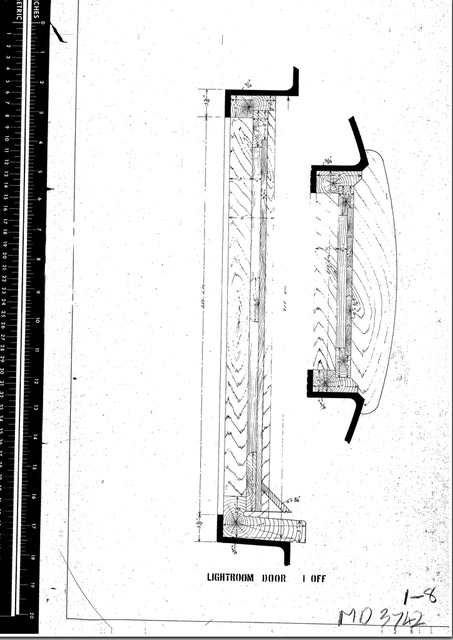